At long last my latest (and most favorite) pattern has finally been released!

It feels like this one was a long time coming. I believe the idea came to me way back in early spring but the process of bringing the idea to fruition, which you can read about in the Design Series, takes a long time. And now it’s finally here, just in time for fall! 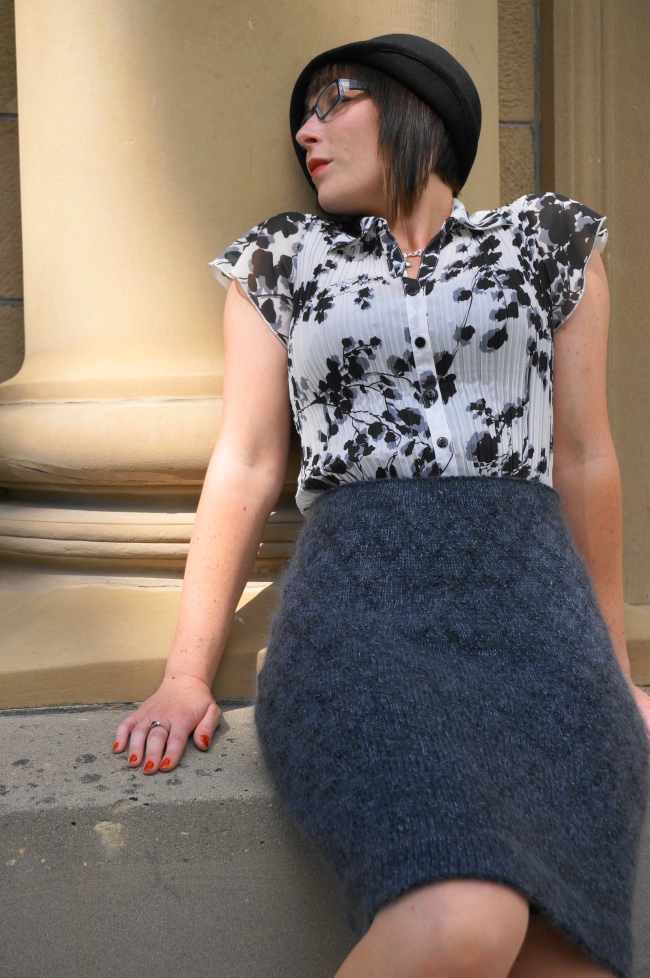 Which is great since the skirt was designed with fall and winter in mind.

The inspiration for this piece is my friend Helen. She is a very stylish woman who always wears skirts and heels, even if it’s to take her two dogs and 3 year-old son to the park. Helen the lady is classy, sexy and curvy. Helen the skirt is, too. It’s the kind of skirt that would look great worn in the office with a fitted blouse, or to the farmers’ market with a simple t-shirt. It’s for the woman who does it all and wants to look good doing it.

You can find the skirt on Ravelry, or on the Knit Picks website where you can make a kit and buy the yarn and pattern at the same time. Couldn’t be easier!

I must again thank Eleanor Dixon for technical editing. And an enormous thank you to Helen Walls for being my muse and model. I asked her if she could bring some coordinating clothes and accessories to the shoot with her and she showed up with the most perfect outfit without having ever seen the skirt in person. And of course she looked amazing! Thanks lady!

Well, there you have it folks. We’ve made it all the way to Installment Five before we actually begin writing the pattern. I guess I always thought that it was the hard and time-consuming part, but really, it’s part that I find comes the easiest and doesn’t take nearly as long as I had originally anticipated.

Once I’ve determined what yarn, stitch patterns, construction techniques and dimensions I want to use, it’s time to put it all together into words. And those words need to make sense to absolutely anybody and everybody who reads them, providing they know a bit about knitting. I guess that’s where my science background comes in handy. I see pattern writing as essentially the same thing as writing a lab report, and boy have I written a lot of lab reports over the years!

First you have your Purpose/Hypothesis: I give a brief introduction to the pattern, usually touching on the inspiration for the piece and the important design details. The hypothesis is that if you follow these instructions then you will end up with an item looking like the one in the picture, more or less.

Next, your Materials: The amount and type of yarn needed, needle type and size, tapestry needle, various other implements and notions.

Then on to Methods: Starting off with a glossary, followed by step-by-step instructions of how to “replicate the experiment” / “knit the garment”.

And finally, Conclusions: I like to (and you really should) include a drawn-to-scale schematic showing the finished measurements of the blocked piece.

Also, like in a lab report, I try to stick with a third-person, passive voice. I guess it’s my training, it just seems natural to me that this should be the way to write instructions. There has been some debate about this, and I must say I don’t adhere to it 100%. There are often times that it comes across sounding weird, and other times where I just want to lighten the mood a little. Like in the upcoming Helen Pencil Skirt, I have one section called “The Straight Part” and another called “Hip to Waist Shaping (AKA the Curvy Part).” The beauty of this not actually being a lab report is that it’s okay to not take yourself too seriously now and then.

Another aspect of pattern writing that draws some debate is whether to write first and knit later, or vice versa. For my first pattern I worked out all the numbers, knit the pattern taking notes along the way, and then wrote the pattern. This seemed like a good idea at the time, and it didn’t work out too badly, but in the end it’s not the ideal method for me. For one, I am not the most organized nor diligent person in the world. I had to do some real sleuthing to figure out what I had done when it came time to write it all down weeks later. Also, once the pattern was written I didn’t know for sure that it was easy to follow again. So then I knit a whole other sample. For all subsequent patterns I have written the pattern first and then sat down and knit the sample from the instructions. Yes, this means tinkering with the pattern along the way, but it’s much easier to make adjustments to the pattern once it’s written. And it also lets me find possible mistakes and ambiguities that I might not have noticed otherwise.

The hard part of pattern writing for me is formatting. In an ideal world I’d be using something like Corel Draw or InDesign to put together my patterns in a very lovely snazzy-looking way. But, the world not being ideal, I don’t have the budget to fork out thousand(s) of dollars for those programs. And I’ve tried working with free programs like Inkscape and Scribus, but the learning curve is so steep that I have a hard time dedicating my time to figuring them out. So, sadly, I hobble my patterns together in Microsoft Word and use CutePDF to convert them to PDF’s. The end product still looks good, and it gets the information to the consumer, but maybe when I grow up I’ll get them looking real fancy-like. For now, here’s a little view of what my patterns look like. 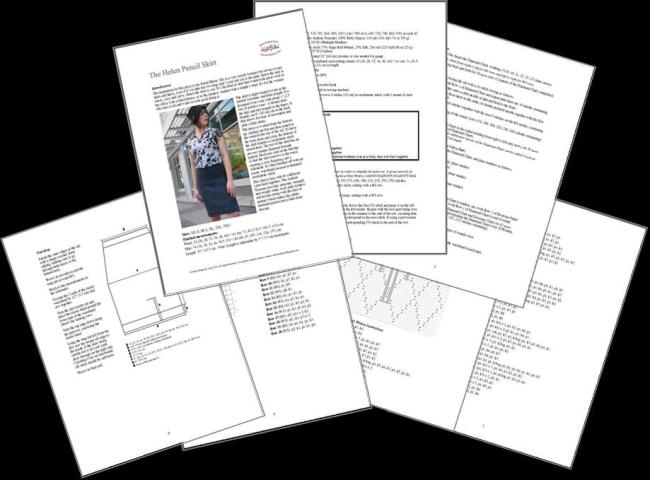 That swatch that was knit way back in the second installment of the series is coming back to the fore again. Not only does it show you how your fabric will look and how the different elements will work together, it also contains two very valuable numbers. Those would be your stitch gauge and your row gauge, or how many stitches and rows, respectively, make up an inch of your blocked swatch. Most patterns will give the gauge per 4 inches (10 cm), and that is the best way to measure it for accuracy. But when determining the numbers for a pattern I always use a the per inch (2.5 cm) gauge.

The next set of information needed are the measurements of the type of person or thing you are designing the piece for. If you’re just designing for one person or thing in particular, using their measurements is ideal. But, when writing a pattern for public consumption you are going to greatly increase your market if you include instructions for many different sizes. There are a number of different resources out there with this information but I tend to go with the Craft Yarn Council’s Standard Body Measurements/Sizing table. There is a wealth of information there for men’s, women’s and children’s standards.

Now that you’ve got your gauge and your standard sizes, it’s time to put that information together. Marnie Maclean has an incredible tutorial on how to use Excel to do all the calculations for your pattern. Excel is particularly helpful for the grading aspect of the calculations, or figuring out the numbers for all the sizes you are interested in.

I’d say that for me this is the most time-intensive part of the process, mostly because I don’t have a very streamlined spreadsheet yet. I maintain a template each for women’s, men’s and children’s sizes, and, in theory, I should just be able to plug in my gauge information and have it spit out the majority of my information. Unfortunately my templates aren’t really at that point yet, but I’m building on them all the time. Below is an example of my current template for women. I’d love some feedback on what I might be missing. Perhaps I’ll come back to this post down the road and show a much different (better) template, but for now this is what I’ve got.

Vacation (and summer almost) over, back to the blog. Time for the third installment of the design series, in which I’ll cover the submission process.

I’m certainly not an expert when it comes to this aspect of the business. I have had success and failure, both with the pattern featured in this series in fact. But I’ve answered calls for submission a few times now so I can pass on what I do know.

Typically a company will put out a “Call for Submissions,” in which they detail what they are looking for in terms of color, yarns, themes, etc. If I have something in my “little book of ideas” that seems like it would be a good fit for the Call, I put together a submission.

A submission is basically a one to two page showcase of your idea and how it would come to be. It should include, at minimum, a sketch of the idea, a swatch, suggested yarn(s) and a little blurb about the pertinent details of the design. It’s also helpful to include a schematic showing the dimensions of the piece, a bit about the construction, and short bio of the designer with some examples of previous work.

So what are you  hoping to gain by submitting a proposal to a yarn company, magazine, publisher, etc? Almost always you’ll get yarn support, that is, yarn provided to you at no cost, to knit the sample. Sometimes the company will provide editing, photography, layout and promotion, or any/all of the above. In return for your design and written pattern you may get paid a flat fee, royalties, or sometimes nothing at all, just the promise of “exposure”.  Some deals are better than others and you must really weigh all your options and consider just what it is you’re looking for from the arrangement.

Here is an example of a successful submission (with a few details removed.) One very similar to this was submitted to and rejected by Knit Now magazine. But, not accepting defeat, I modified it slightly to fit the format requested by Knit Picks and resubmitted the idea to them. This time I had success, and you should be seeing the new pattern within the next few weeks.

That’s about it for this phase of the process, next up – Math and Grading!

I’m looking for testers for my upcoming design, the Helen Pencil Skirt. Yep, this is the pattern from the Design Series. You can find the details in the Cowtownknitters thread on Ravelry.