I asked Janelle my Five Questions, and here is how she answered:

I’ve been a knitter for more than 30 years and I love it more each year.  I’ve been teaching and designing a number of years and this past August I taught outside of Ontario for the first time, at Lancaster Yarn Shop in Lancaster County, PA and at Cast On! Cast Off! in St. John’s, NL.

I was awarded the 2011-2012 Sally Melville Award (KW Knitters’ Guild), awarded (by members’ votes) to “the knitter who has most inspired its members.”  What makes it such a special award is that Sally was such an inspiration to me when I was a young knitter.  She was one of the cofounders of our local knitter’s guild, a guild filled with a number of innovative knitting designers such as Sally and Debbie New.  This past spring I was honoured to receive the Amy Hallman Snyder Textile, Fibre and Quilting Arts Award at the 26th Annual Arts Awards Waterloo Region.

I started designing just to see if I could do it.  A number of people had suggested that I should design but I had never really thought of myself as creative.  I took painting and drawing courses in high school and university but felt I didn’t have a message or esthetic I wanted to share in those mediums.  I was always drawn to collage work and I think, for me, designing knits is closest to this process.  I start with my “blank canvas” by choosing the shape of the piece I want and then I combine stitch patterns to create the texture upon that canvas. 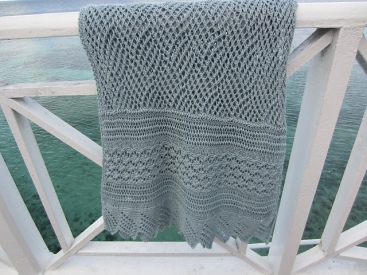 3)     How would you describe your design style?

The exciting part for me is creating organic designs.  I like there to be continuous lines in my work, for the stitch patterns to grow out of each other.  Often this means I have to create transition charts to move from one stitch pattern into the other.  My complex lace designs, such as Cartouche Shawl or Flower Bell Stole, often have five or six charts to handle these transitions, but the result is worth it.

I’m most drawn to lace and cables, but especially Japanese stitch patterns for lace.  I own a large collection of stitch dictionaries and spend a lot of time contemplating ways to combine different stitch patterns.  I then work up stitch charts to combine the various elements and then swatch to see how they work on the needles.

4)     What is your favourite pattern of your own design?

Each new design that I release becomes a favourite at the time, but I do have a few personal favourites.  I keep coming back to the stitch patterns most recently used in the Cartouche Stole and I have two other designs in the works that utilize elements from the stole.  Obviously I’m not done with these stitch patterns yet!

For personal wear at the moment I’d have to pick the Fossetta Cowl (how can you beat the cuddly warmth of Yak?) and New Tech Cowl.

This year I’m limiting myself to small gifts, leggings for my niece and a hat for my nephew.  The past few years I’ve knit a lot of Christmas gifts so I decided to give myself a break this year.  Too many years where I was still finishing knitting gifts early on Christmas morning!

All photographs used by permission, copyright Janelle Martin. Top photo taken by Janelle’s dad, all others by Shawn Miller.

Thank you so much to Janelle for sharing your story with us!

To celebrate the Gift-A-Long, Janelle and I would like to offer you the opportunity to win one of her patterns. To enter, have a look through Janelle’s patterns and leave a comment below telling us which is your favourite. Leave your comment before midnight MST Thursday, November 20th and I will do a draw the next day to choose a winner. Good luck everyone!