Check it out folks, I re-worked the Pippa Toque!

The previous version was written with yarn that had been discontinued. Although most people are comfortable with substituting yarn, others like to use the exact one called for in the pattern. I have recently fallen in love with the vivid, saturated colours of Jil Eaton Minnow Merino yarn and thought it would be perfect for this project. I was right! 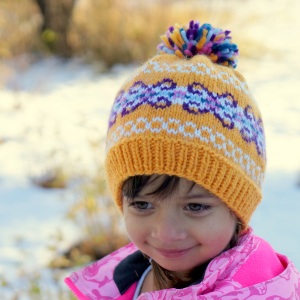 I also wanted to update the pattern for more sizes and lay it out in my new pattern format. The pattern is now available in 5 sizes, from baby to adult.

All of this updating happened in a bit of a rush because I needed to have it ready for a fun event that’s happening tomorrow. I’ll have a booth (for the very first time) at the Calgary Fibre Arts Fair! If you stop by you can see all of my samples and even grab a free print copy of the Pippa Toque pattern.  There will lots of other vendors and classes going on, and I’ve heard there’s some great door prizes! Please stop by and say hi if you’re in the area!

First, let me tell you about the Powder Day e-book.

I’m so excited to be releasing my first collection of patterns. The book was released today with just the Fernie Hat, at a reduced price. As the other patterns get released (between now and January), the book will get updated. Buyers will get an updated version emailed to them each time an update comes out. Early buyers get the book at the seriously great price of $7. Each time a new pattern is added, the price goes up, so it will be $9 after the 2nd pattern is out, then $11 when the 3rd pattern is added, and then it will be the final price of $14 when all 4 patterns are there.  And since you can already see what you’re getting, what have you got to lose?

And with the release of the e-book today also came the Fernie Hat, the first pattern in the collection.

The Fernie Hat features the figure-eight cable on a reverse stockinette stitch background. It starts with a twisted rib brim, which evolves into a set of 6 cables that eventually taper to the top. It’s finished off with a funky pompom, as all hats should be!

If  you’re interested in just the hat then it’s available as an instant download on Ravelry for $5. 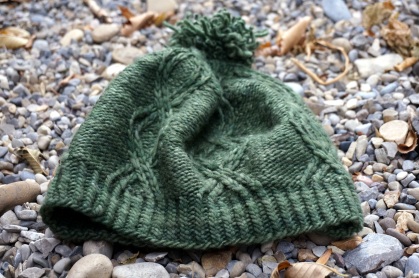 Once again, thank you to Eleanor Dixon for technical editing and to all of my testers for being the best group yet! And I can’t say enough of a thank you to my beautiful friend and model Tamara, who taught me to knit all those years ago!

I’m so darned excited to be putting together my very first collection of patterns, and can’t wait to tell everyone about it.

As you can tell by the name, the Powder Day collection is inspired by those epic days of deep, fresh snow. You know, when a couple very lucky people are the first ones to the top of the hill after a big dump, and they get to make fresh tracks. If those skiers are going for extra cheesy, they can make tracks that look just like this… 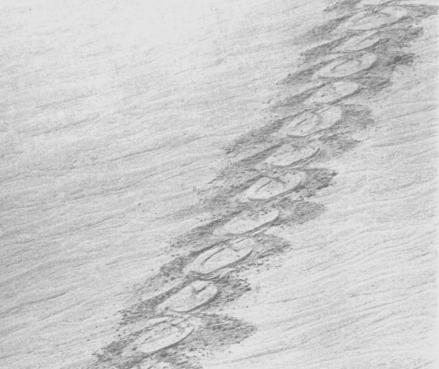 I wanted to mimic those figure-eight lines in the snow with a cool cable pattern, so I did. Then I fell in love with the cable and wanted to put it on everything. So I did! Fingerless mitts, a hat, full mitts, and a sweater.

It’s tricky to photograph something with a snow and ski theme when you’re limited to being in the city in October. But that’s what we tried to do this morning. I enlisted the help of 4 beautiful ski buddies, those very same ladies I used to ski with before we all had kids*. We gathered up some vintage skis, hot coffee and warm knits and headed down to an old barn in the middle of the city. I was hoping to pull off an apres ski feel, a bunch of friends hanging out at the lodge and warming up after a great day on the hill.

I will be releasing the patterns one-by-one over the next few months and will eventually group them all together in an e-book when they’re all out. For now, here’s a look at what’s to come.

* We called ourselves BOS back then – Bitches On Skis.

I just released my first free pattern, the Pippa Toque. It’s a cute little hat to keep heads and ears toasty and warm on cold winter days. The close stitches and stranded colour work make this a nice thick fabric for great insulation. Thank you to Eleanor Dixon for technical editing and to Ryan Barr for the wonderful photography again.

You can Download It Now from my Ravelry store!